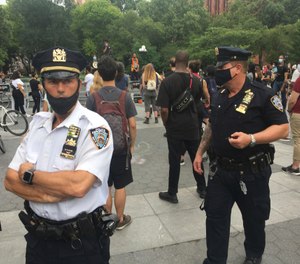 Posted at 05:28h in Uncategorized by admin

In just the last week, officials with the New York Police Department say retirement fillings have more than quadrupled what they were last year.

“While the decision to retire is a personal one and can be attributed to a range of factors, it is a troubling trend that we are closely monitoring,” O’Donnell told CNN. Sgt. Mary Francis O’Donnell said the number of filings between June 29 and July 6 skyrocketed to 411% from the same time in 2019, according to CNN.

“Of course, cops are retiring at a higher rate,” Chris Monahan, president of the Captains Endowment Association, told CNN Wednesday. “We’ve been abandoned by the NYPD and elected officials.”

The rise in filings comes as George Floyd protests continue and calls to defund the police mount. Mayor Bill DeBlasio slashed $1 billion of the NYPD budget earlier this month, about 16.7% of its budget in the 2020 fiscal year, according to CNN. The funds were reallocated to youth and social services.

“New Yorkers are losing their most experienced crime fighters because of continued violence in the city and the apathy of misguided elected officials,” Paul DiGiacomo, president of the Detectives’ Endowment Association told CNN. ‘It’s a real loss to civilians.’