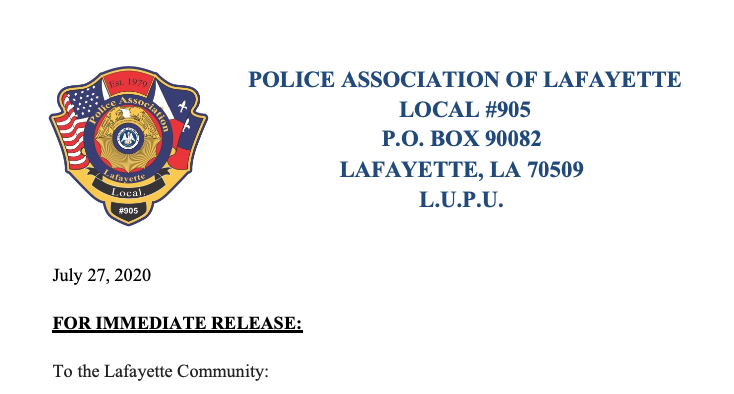 Posted at 17:27h in Uncategorized by admin

To the Lafayette Community:

We, The Police Association of Lafayette, have been fortunate to have the continual support and appreciation of our community. To that end we have made it a point of emphasis to be as neutral and unbiased as possible when dealing with most local and some would say “political issues” facing our community. Only in the most extreme circumstances do we as an organization feel compelled to speak out. This is one of those circumstances.

Mayor-President Josh Guillory recently released his proposed budget for the 2020 – 2021 fiscal year. Contained therein are several proposed budget cuts, many of which we do feel are justifiable given the extreme economic circumstances we find ourselves facing as a result of measures but in place due to the COVID-19 pandemic. Some of the proposed cuts directly impact police and fire services for the City of Lafayette. The Lafayette Police Department is facing a proposed cut of 7.1% in funding (over 2 million dollars). While the Lafayette Fire Department is facing a proposed cut of 4.5% in funding. We understand and support a “tightening of the belt” as we are sympathetic to the tax burden and financial stress upon our community. We are a part of the very same community. We live here, we raise our families here, we have friends here, and as such we understand the need for budget cuts. We all strongly believe in our mission and the need for funding to accomplish our mission, however, we also know we have the most highly trained and professional law enforcement agency in this state. We will simply continue to rely on the strong relationship we have built with our community to get through the hurdles we face at this time.

On the other hand, we are outraged and sad when we see our community suffering and know that these irrational decisions will likely have a lasting impact on our communities’ children for years to come. The Mayor-President believes that terminating 37 employees from the Parks and Recreation Department and closing recreational centers is the best decision for our community at this time. This will undoubtedly affect the children of the community. It will leave many of these children with less recreational opportunities, structure and mentorship making them more susceptible to being sucked into a life a crime.

Despite this the Mayor-President feels this is appropriate and the best course of action while also clearing the path to funnel an additional $2 million dollars to Sheriff Mark Garber, whose office is self-funded through taxes and other revenue sources. If this sounds familiar, it may be because back in December of 2019 the Lafayette City-Parish Council voted to approve a pair of ordinances transferring $850,000 to Sheriff Garber. At that time Lt. John Mowell remarked: “Our objective is the financial health of the sheriff’s office”, but we wonder IS IT? Sheriff Garber is now in his second four-year term as Sheriff of Lafayette Parish. After initially running under the guise of being fiscally conservative Sheriff Garber has been seemingly more interested in taxing, spending and begging for bailouts. The Police Association of Lafayette – Local # 905 vehemently opposes these actions.

While terminating 37 employees, including the entire Park Police Department, Mr. Guillory simultaneously moves to transfer millions of dollars away from in need areas of Lafayette Consolidated Government to Sheriff Garber. This is being justified as “improvements in LPCC” in a time when Sheriff Garber isn’t even allowing the overwhelming majority of criminals to be booked into the jail. And community please don’t forget about the on-going improvements and renovations to the Lafayette Parish Jail funded by Lafayette Consolidated Government over the past few decades all while the Sheriff was constructing his own private jail on Willow Street under the guise of being a “public safety complex”.

We fully understand the political blowback that will likely result from this, as Sheriff Garber has already begun speaking of his intentions to dismantle the civil service system, which has provided the citizens of this community with one of the best trained and professional law enforcement agencies in the state, in favor of a discriminatory promotion system. Even knowing Sheriff Garber’s intent to ride on the waves of cries for police reform to destroy the established system at the Lafayette City Police Department we can no longer sit quiet.

We are asking that Mayor-President Guillory do the appropriate thing and rescind his decisions to bail out the Sheriff and terminate 37 members of the LCG family. These 37 individuals are community advocates and their jobs are more important than improving the showers at the jail, as Lt. Mowell has indicated the money will be used for.