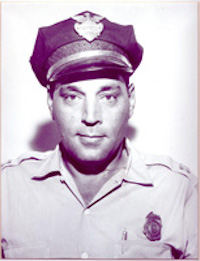 Posted at 08:00h in Uncategorized by admin

Today marks 60 years since two police officers showed up at Captain John “Rocky” Langlinais’ house and let his family know he would not be coming home to them.

On July 22, 1960, shortly before 10:00/PM Captain John “Rocky” Langlinais, Detective Captain John Fletcher and Detective John Troglen arrived at the downtown bus station on Lee Avenue. The men were acting on a tip received by Lafayette Chief of Police Malcolm Fischer that Nolan Baker, who had an active arrest warrant, was onboard a bus from Houma, Louisiana. Just one day earlier City Police and Sheriff’s Deputies, led by Chief Fischer and Sheriff W.E. Harson surrounded the house of Baker located on Clay Street where he was reported to be armed. It was then learned that Baker had fled to Houma.

Langlinais, Fletcher and Troglen had coffee while they awaited the arrival of the 10:00/PM bus. Langlinais was in uniform, while Fletcher and Troglen were dressed in plain clothes. When the bus arrived Fletcher watched the emergency exit of the bus, while Langlinais and Troglen remained together watching the bus entrance. Troglen observed a subject walking down the aisle of the bus and asked Langlinais if it was Baker. Langlinais confirmed it was Baker. Baker reached the front step of the bus with a woman standing in front of him. When the woman stepped off the bus Baker swung around and yelled defiantly ‘You’ll never take me alive.’ Baker then fired a single shot from a sawed off shotgun which he had wrapped in newspaper and concealed under his coat. Troglen returned fire killing Baker. Officers recovered four unused shot gun shells which had been altered by removing the pellets and replacing them with four slugs in each cartridge.

“Dad, when you passed away before your time, I was five years old. We didn’t have enough time together for me to have stored accurate, lasting memories of us. We never had a chance to go fishing, play ball or work on the car. Everyone I’ve ever met who knew you said that you were a wonderful person. I know this is true. I wish we had had the opportunity to know each other. I know that you would have made a fantastic mentor and that we would have been a great team.

For forty-six years I’ve kept you in my heart. After all this time, there are things I am sure of and things I wonder about.

I am sure that after forty-six years, your wife, my mother, still thinks about you and misses you every single day. She has had a very hard life without you but she has been as strong as anyone could be after such a tragic event so early in life. I’m sure you would be very proud of her.

You made captain so young, I wonder what else you could have accomplished had you not been taken so soon; mayor, representative, governor? I wonder just how so many people’s lives would be different had we been able to benefit from your paternal leadership and wisdom. You would now be a grandfather and great grandfather. I’m sure you would be a terrific, great grandfather.

John Roy “Rocky” Langlinais, you are always in my heart and will never be forgotten.”

An article appearing in The Daily Advertiser following the tragic murder of Langlinais read: “Members of the city’s police force are in the anomalous position of daily risking their lives at the hands of berserk gunmen while, at the same time, drawing an extremely low salary. Just how much is a policeman’s life worth? A study by the Louisiana Fraternal Order of Police puts the salary of the Lafayette Patrolman as the lowest in 138 cities sampled. The local patrolman’s annual salary is $3,060. The national average is $5,422. This disparity follows through to a captain who, in Lafaytete, draws an annual salary of $3,960.”

Two years later May 13 – 19 was declared “Police Week” by Mayor J. Rayburn Bertrand who made the proclamation “in recognition of the contributions the police officers of America have made to our civilization through their dedicated and selfless efforts in enforcing the laws…”

Today we honor his service to our community and thank his family for given him to us. Today and everyday we #BackTheBlue.